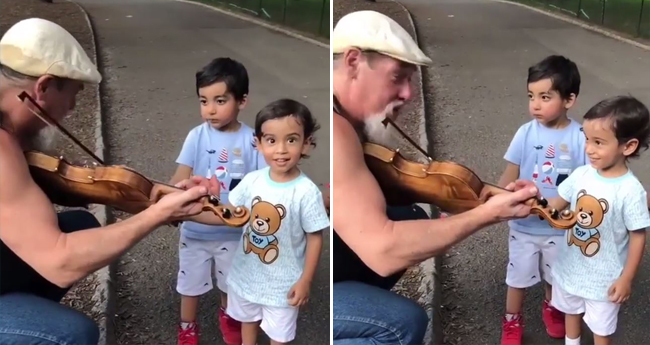 Arpita Khan Sharma and Aayush Sharma’s little munchkin Ahil always be in limelight. Ahil receives so much love of everyone including his mamu Salman Khan and mamu’s co-stars Katrina Kaif, Jacqueline Fernandez, Daisy Shah, Priyanka Chopra and others.

Recently, Ahil’s mother Arpita Khan Sharma shared an adorable video of Ahil on Instagram in which he can be seen enjoying with a man who is playing sweet notes on his violin. Ahil mistook the violin as a guitar and he expressed his desire to play it.

The mommy of Ahil posts his pictures and videos on social networking sites very often. Recently, a picture of Ahil and Priyanka went viral on social media sites. Before that, the little munchkin was spotted with Jacqueline Fernandez at Disney Land. Jackie who was on a world tour for ‘Dabangg Reloaded’ along with other stars took some time from her busy schedule and spend time with Ahil. Also, Ahil’s father Aayush Sharma is gearing up for his debut film ‘Loveratri’

Arpita also shared a picture of Priyanka Chopra with Ahil in NYC and captioned it as, “My favourites @priyankachopra & Ahil ! Nyc diaries”

In a picture, Priyanka opted to wear a DVF short-sleeve button-up belted cotton shirt dress. The dress fit Priyanka like a dream, left with just a hint of cleavage that made her look equally alluring and chic. Priyanka added a pair of golden cat-eye glasses and a dainty gold chain along with a bracelet to her dress.

Well, Ahil is very close to mamu Salman and once Arpita took to Instagram shared some pictures in which she wrote: “Parental guidance required….Everything should not be going in the mouth. Just when I left him I got these pictures …Mamu @beingsalmankhan & Masi & Mausa @atulreellife spoiling him. Monster in the making!/” “The things he does when I am not around @beingsalmankhan,” she further captioned it. “Oh no …. & it goes on ! And it continues this is how he spent his Sunday !”