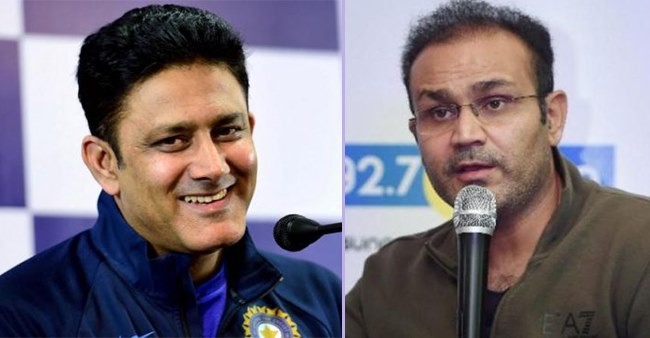 The former Indian team skipper Anil Kumble has the ability to enhance confidence among the players and this quality in him makes him a role model. He is the right person for the role of chairman of selectors according to the opinion of Virender Sehwag. Sehwag also pleaded in favor of giving a hike in the remuneration for the job. The former opener Sehwag also told BCCI requires to pay more for leading the committee of selectors.

As of now, MSK Prasad is the head of the current selection panel. The panel is confronting much criticism for being little competitive with the accumulative experience of 13 Tests. During the launch of a new app namely ‘The Selector’, Virender Sehwag said, ‘I think Anil Kumble could be the right candidate for the chairman of selectors post. He is someone having interaction with Sachin, Sourav, and Rahul as a player and with youngsters as a coach.’

Sehwag further added, ‘As I made a comeback with the Australia series in 2007-08, Captain Kumble came to my room and said you will not be dropped for the next two series. That’s the kind of confidence a player needs.’ Sehwag considered Kumble won’t accept doing the job as of now since the chairman receives Rs. 1 Crore per annum. He said, ‘BCCI needs to raise bar as far as pay is concerned. Then a lot of players will be interested in.’

On this day 8 years ago, I scored a king pair vs England in Birmingham after flying for 2 days to reach England and fielding 188 overs. Unwillingly paid tribute to Aryabhatta :) If there was zero chance of failure, what would you do ? If you have it figured, do that !

The Nawab of Najafgarh said, ‘I write columns, appear on TV and being selector will mean a lot of restrictions. I don’t know whether I would like so many restrictions.’ As Sehwag was asked whether he was surprised as Shastri was re-appointed as the coach he said, ‘In 2017, the BCCI secretary and (late) Dr. MV Sridhar (GM Cricket Operations) asked me to apply so I applied. This time no one asked me, so I didn’t apply.’

Virender also expressed his happiness for Sreesanth as his interdiction was deducted to 7 years. The brand ambassadors Virender Sehwag and Brian Lara launched the selector app in New Delhi on Wednesday. They have given an assurance of changing the viewpoint on the sport across the globe.