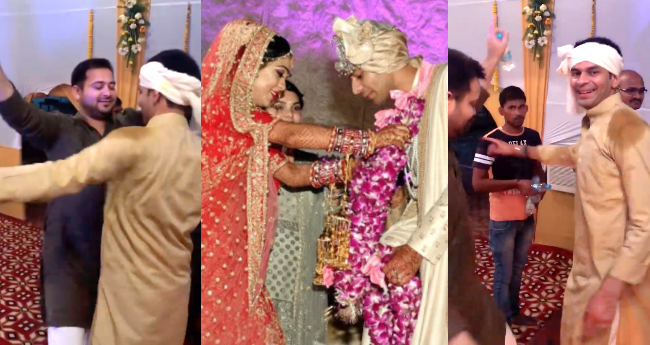 Prior to his brother Tej Pratap’s marriage ceremony, Bihar’s opposition head Tejashwi Yadav made a special tweet on May 12 to provide a quick look into the festivities.

Calling himself and his brother ‘desi boys’, Tejashwi Yadav shared a special video recording of him shaking legs with Pratap. One more video recording, which has been ruling the social platform showcases Lalu Yadav’s companion Rabri Devi enjoying the dance with her family members comprising Tejashwi, to a well known Bihari number. A visibly contented Lalu called up Tej Pratap’s fiancée Aishwarya Rai and passed on good wishes to her, stating “you are already proving a lucky charm for us”.

Lalu was out on the temporary bail given to him by the Jharkhand High Court.

Around 50,000 guests are expected to be a part of the marriage ceremonial of RJD chief Lalu Prasad Yadav’s loving son Tej Pratap Yadav with Aishwarya Rai on May 12 in Patna.

Going in opposition to Bihar CM Nitish Kumar’s drive of keeping marriage functions a simple affair, the marriage is being witnessed as a big occasion in Patna as the visitor list comprises a number of high-profile political heads, ministers, entrepreneurs and other biggies. The hosts have given an invitation to 50,000 guests to the marriage ceremonial at the extensive veterinary college ground in the capital city.

Congress president Rahul Gandhi and his sister Priyanka Vadra are among the dignitaries expected to be present at the marriage.

The big occasion in Patna will witness imported flowers from Thailand being utilized to adorn the stage whilst the major entrance to the place will be bedecked with Bihar’s Mithila work of art. But, a day prior to the marriage, gates of the 7, Circular Road residence, got beautified not only with blossoms however also lemon chili to defend against bad omen.

Desi boys on the floor..

The expansive place would boast of over 200 food stalls to serve up the invitees whilst RJD spokesperson Shakti Singh Yadav, who is supervising all the preparations, stated that the foodstuff will be vegan.

Shakti Singh Yadav stated, “Lalu Ji is a firm believer and worshipper of Lord Shankar. He believes non-vegetarian dishes should be avoided on such pious occasions.”

Around 100 cooks are likely to make food for the guests and as per reports, a Bihar based designer has been hired to design Tej Pratap’s wedding dress.