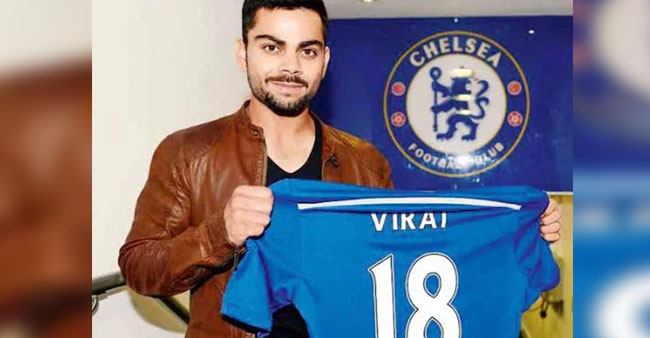 In this Season of World cup 2019, where England is hosting the world cup and getting a tournament against South Africa on 30 May, every Nation is busy preparing for the best.

A report said that a few days ago, the captain of England’s football team; Harry Kane posted a picture with Virat Kohli, who in turn wished him for the Champion’s League Final between Liverpool and Tottenham Hotspur.

It was a special evening at the Indian Cricket Heroes. @ICHOfficial 🇮🇳 #heroes pic.twitter.com/tksrTNP628

As you all know I love both football & cricket. I asked @DavidLuiz_4 who he was backing for the @cricketworldcup & his reply was @BCCI & captain @imVkohli . He had a special message for the captain. 🇮🇳 #ViratKohli pic.twitter.com/2kKqwSnrtX

Frank Khalid tweeted his statement as, “As you all know I love both football and Cricket I asked David Luiz who he was backing for the cricket world cup and his reply was BCCI and Captain Virat Kohli he had a special message for the captain.“

Captain Virat Kohli also once showed his love for Chelsea Foot ball club in 2014, when he posted an image of himself holding the famous Jersey of Chelsea foot ball club.

Virat Kohli will lead for the first time in a 50 over world cup.

Back at it with the boys! #trainingday #CWC19 pic.twitter.com/ZlyPnJdC5s

India will open its campaign against South Africa on 5th June. India didn’t have a good start due to losing their opening warm up game in opposition to New Zealand.

In spite of the high score of Jadeja slamming 54 off 50 balls, India lost against New Zealand by six wickets.

Indian skipper Virat Kohli and its squad will face Bangladesh in their second warm up game on Tuesday i.e. 28 May.