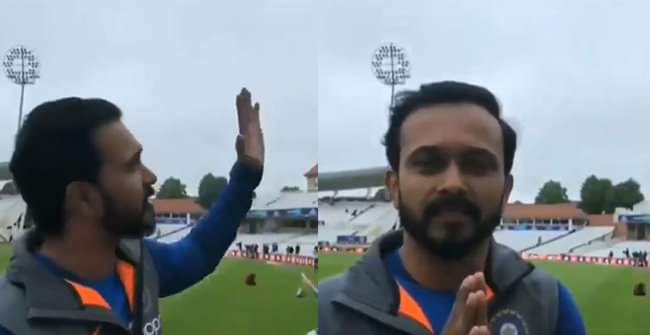 Frustrated with the continuous rainfall in England, Kedar Jadhav Asks rains to go to Maharashtra.

The ICC World Cup 2019 has come to a bit of a stop in the place of origin of cricket as the continuous showers have chosen to assume control over the competition and ruin it for everyone from players to authorities and to the fans.

In the previous four days, the fans of the Cricket World Cup are disappointed because they are really missing over some good matches due to the nonstop downpour in England. The place is encountering twice the average rainfall in June itself.  English Cities Hampshire, Bristol, and Nottingham are witnessing nonstop rains which in turn resulted in calling off the India vs New Zealand match on 13 June 2019, Thursday.

The enthusiastic fans of both the teams were unhappy to see their players in casual clothes rather than sporting their jerseys.

Indian bowling all-rounder, Kedar Jadhav contributed towards the day by leaving the dressing area and conveying a video message that has been making the rounds on social media since he posted it.

In the video, the 34-year-old can be observed asking the Nottingham downpours to move far from the city and rather move to his home territory of Maharashtra, which is as of now confronting massive dry conditions with just 7 percent of water left for utilization that has influenced the lives of local people living there.

Jadhav was applauded for his wittiness as well as the way that he recollected and felt pain about the battles of his people the fact that he is many miles away from home.

I find his voice cute and that's why I laughed. Kinda laugh everytime I listen to him

Since Team India’s third match of the 2019 World Cup has been washed out, everyone’s eyes will be on the climate for Sunday when the Men in Blue will play against the neighboring Sarfaraz Ahmed’s Team Pakistan at the Old Trafford Cricket Ground in Manchester.

Russo Brothers Are All Praises For Priyanka Chopra Jonas; They Call Her ‘Incredible Star’...

Jamai Raja 2.0: Nia Sharma Spills The Beans On Her Infamous Fall Out With Co-Star Ravi Dubey In 2013...