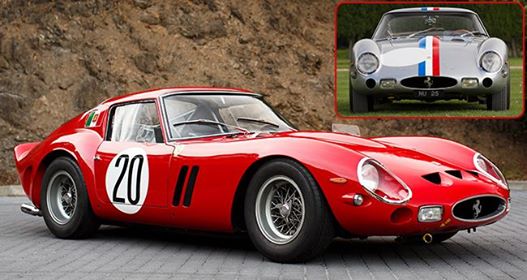 Ferrari is a world famous car manufacturing company. When you buy a car from Ferrari, you enter among top few of riches people in any country. Ferrari assures you a long, comfortable journey in their most luxurious cars. Ferrari cars have garnered highest bids in auctions since having Ferrari is a guarantee of the comfortable and luxurious drive, anytime and anywhere. Recently, a 1963 Ferrari 250 GTO displaying the frame number 4153 GT has sold for a record $ 70 million. And that is about Rs 469 Crore in India. The car has been sold to known American Ferrari collector David MacNeil, CEO of a company called WeatherTech that makes floor mats and accessories for cars. The Ferrari 250 GTO has been on the top of the bidding charts when it comes to ‘the most expensive car in the world’ with one selling for about $ 35 million in auction a few years ago and then another reportedly going for $ 50 million to a private seller.

Also known as the Ferrari 250 GTO Tour De France, the factory silver painted Ferrari 250 GTO has a glorious history of racing apart from the 1964 Tour De France that it won. It was raced by fabulous Belgian independent Ferrari race team Ecurie Francorchamps, the car came fourth in the 1963 Le Mans and has even raced in the Angloan Grand Prix in Africa in 1965. It is said that the Ferrari 250 GTO is the greatest of all Ferraris ever built and is possibly the greatest car ever built according to many claims. The 250 GTO came with a 3-litre V12 making 300 bhp. When launched in 1963, the car cost a whopping $ 18,000 in the United States. In comparison, a brand spanking new Ford Mustang the same year was priced at $ 2,368.